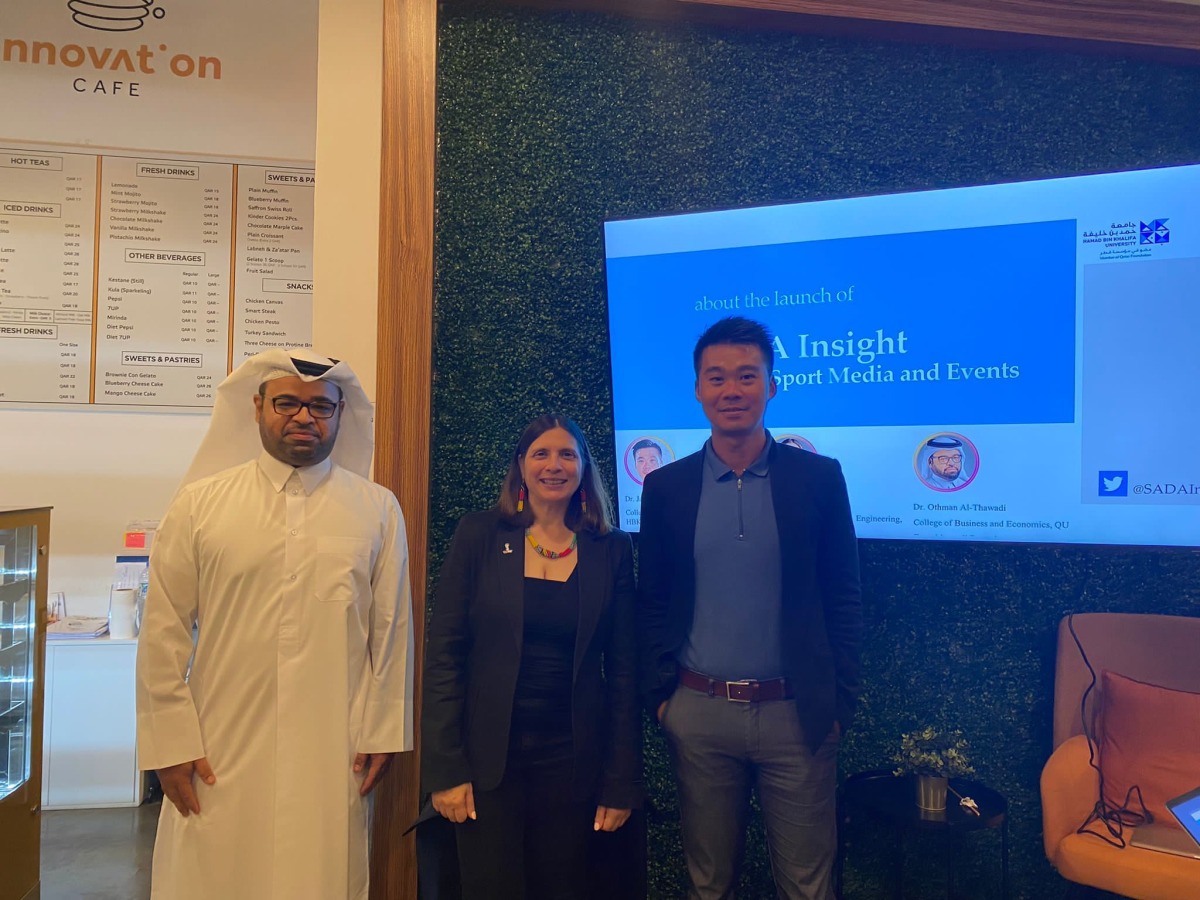 Doha: An artificial intelligence (AI)-based system capable of providing lightning-fast sentiment analysis, research, statistics and alerts on various aspects of a mega-event like the FIFA World Cup was launched on Wednesday by a group of researchers from Hamad Bin Khalifa University (HBKU) and Qatar University in Doha.

According to the researchers, Sada (Arabic for ‘echo’) Insight: AI for Sport Media and Events was born out of a research project on “sentiment analysis on the FIFA World Cup Qatar 2022 using Artificial Intelligence and Twitter”, by Dr James She and Dr Kamilla Swart.

This project was initially funded by the Supreme Committee of Delivery and Legacy and CyPhy Limited, then collaborated with Michael Linley, University of Victoria, and Dr Othman Al-Thawadi, Qatar University.

“The technology, methodology and system derived from the research can provide us with the ultra-fast AI-based sentiment analysis, research, statistics and alerts on various aspects of a mega sporting event like the FIFA World Cup Therefore, media channels, journalists, organizers and even individual professionals could acquire near real-time summary and timely insights into high-profile topics and incidents perceived by the public at about a sporting event,” the research report states.

Social media is an important source for gathering public opinion, with Twitter being one of the most popular international platforms for social media.

More than 400 million tweets are posted every day on Twitter, and more than half a billion tweets were obtained during the previous World Cup. This vast set of data helps to analyze the audience’s reaction to an event like the World Cup, providing insights into audience perceptions and attitudes. This research investigates the relationship between sentiment based on Twitter tweets and the 2022 World Cup.

“The unique capabilities of our AI technologies and data system – Sada, developed in this project are the ultra-fast access and continuous sentiment insights for different aspects of a mega sporting event by analyzing the increasing amount and the complex content of the tweets. So far, more than 1 million highly relevant tweets for the World Cup event, the first in the community, are collected and analyzed. The AI ​​system, Sada, will collect more highly related tweets every day, then will continuously analyze and report the sentiments of concepts and keywords identified from newly accumulated tweets containing text, emoji or even images shared by the user later using advanced machine learning techniques and system technologies,” emphasized Dr. James She, the project leader.

These tweets are only collected with relevant Qatar 2022 World Cup hashtags or keywords. Using our AI-based Sada system and derived data and methodologies, we uncovered sentiments and facts fun of some important characteristics for the feelings on the period before the World Cup. The result shows that people are positive about the upcoming World Cup.

“We are delighted with the ability of the Sada system and the information generated to assist in better management and decision-making at all phases of event bidding, planning and implementation” , said Dr. Othman Al-Thawadi. “Additionally, the Sada system and the information produced is applicable to different types and sizes of special events, ranging from sports to non-sports, mega and annual sporting events,” he added.

“The initial groundwork for this project was a legacy of the 2010 FIFA World Cup, and the 2022 FIFA World Cup presented an opportunity to evolve public opinion analysis using of AI technologies and big data from social media that can provide real-time insights to create smarter events,” said Dr Kamilla Swart, who launched the World Cup research program of FIFA 2010 and has been part of several research initiatives aimed at improving knowledge on mega sporting events in the Middle East, North Africa and Qatar region in particular.

For future work, the collaborative project team will investigate public sentiment by advancing HBKU’s new AI, data and system technologies to help uncover other key aspects or even predict the winner of the Golden Ball of this World Cup.

For example, the sentiment of football players can reflect their performance on the field, and the higher the sentiment, the more the sentiment can help us track and predict the winner. Since many tweets may involve complicated sentences and even contain trending multimedia content like emojis, images or even videos, the AI ​​technologies, system and methodologies involved in Sada are considered to provide much insight. more precise and earlier on the feelings of the public. mega sporting event faster than hearing your sound echo!