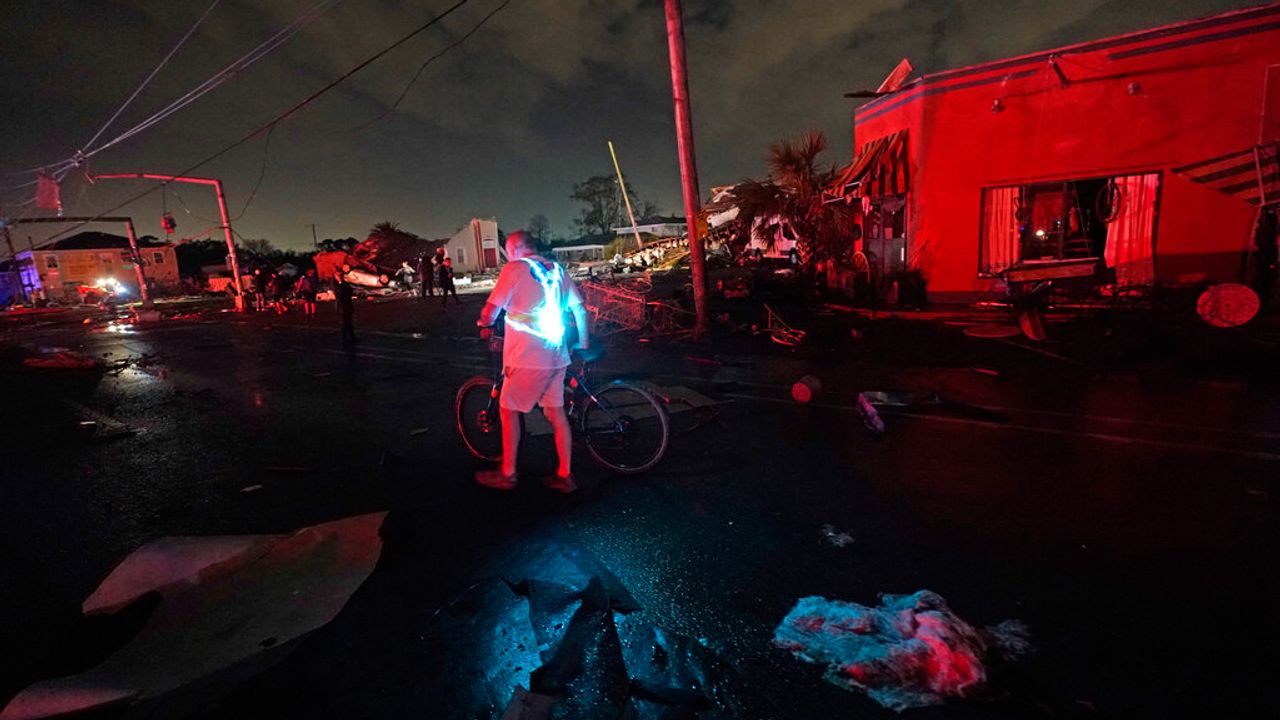 Two tornadoes touched down Tuesday evening in the New Orleans area, killing at least one person and injuring several others. Thousands of people were left without power as emergency response teams searched the wreckage for survivors.

The only death in the Arabi neighborhood has been identified as 25-year-old Connor Lambert. According to St. Bernard Parish Sheriff James Pohmann, Lambert was killed by “multiple blunt-force injuries” caused by debris generated by the storm.

Other reports from residents indicated that a school bus had been overturned, buildings had been ripped from their foundations on the street, and people had even been trapped inside their bathrooms trying to escape. shelter from the storm.

The weaker of the two tornadoes, an EF1 with winds around 90 mph, left a 12-mile-long trail of destruction through the town of Lacombe in St. Tammany Parish north of town. The most concentrated destruction was caused by an EF3 tornado, with winds ranging between 158 and 206 mph, which touched down in New Orleans’ Lower Ninth Ward before destroying much of the Arabi neighborhood just outside east of downtown.

An estimated 12,500 structures were damaged or destroyed along the two-mile trail cut by the tornado. Images of overturned cars and badly damaged buildings were reminiscent of Hurricane Katrina, which devastated the same part of the city almost 20 years ago, in 2005. This part of the city was also hard hit by the hurricane Ida last year.

To help with road clearance and search and rescue, 300 National Guard troops were deployed to the area Wednesday morning.

Although best known for its hurricanes, the New Orleans area is no stranger to strong tornadoes. According to the Tornado Archives, at least seven significant tornadoes (EF2 or greater) have struck the city since 1950. The most recent event was an EF3 tornado that traversed 10 miles along the eastern portion of the metro area in 2017.

The latest tornado outbreak in New Orleans was part of a much larger high-weather system that affected southern states from Texas to Georgia, and is expected to continue up the Atlantic coast, although at a much smaller force.

More than 60 tornado warnings were issued across Texas, Arkansas, Oklahoma and Louisiana on Monday alone, with 16 tornadoes confirmed in Texas throughout the day.

The severe weather began in Texas at 3:41 p.m. local time when a tornado hit the town of Jacksboro, about 60 miles northwest of Fort Worth. Several buildings were damaged, including the local elementary and high school. No injuries were reported.

By 6 p.m. that evening, the system had moved east, spawning three more tornadoes near Round Rock and Granger, Texas, near the greater Austin area, and in Kingston, Oklahoma. At that time, large parts of the southern United States were placed under a moderate risk advisory for severe thunderstorms and potential flooding.

At least one more person was killed in Grayson County, Texas during those tornadoes, bringing the total death toll to two for the entire storm system.

In a statement following the storms, Texas Governor Greg Abbott delivered a typical boilerplate response: “We are devastated by the tornadoes that have hit our communities across Texas, but remain confident and steadfast in our ability to rebuild together. Thank you to all emergency responders and members of the Jacksboro and Crockett communities who came together to help neighbors and strangers. As Texans, we’ve weathered big storms before and built back even stronger, and I’m confident in our ability to do it again.

First responders were forced to navigate through downed power lines as they searched for people trapped or injured during the storm.

Claudette Reuther, a resident of St. Bernard Parish, told AccuWeather: “We’re both on the floor and it probably lasted a minute or two. It wasn’t really long, but at the same time it felt like forever. It was a horrible experience. You could feel the whole house vibrate and you could hear this constant roar. And then all of a sudden, literally, everything went silent, completely dead.

Arabi resident Christine Wiecek told CNN she and her husband feel lucky to be alive. Their home suffered heavy damage, with projectiles generated by the tornado puncturing their roof.

“When the watch turned into a warning, I turned off the stove, we grabbed the cats and went to an indoor bathroom, the only room without a window,” Wiecek said. “In less than two minutes, the storm passed over us. It was really noisy, the house shook and we couldn’t stop the poor scared cats from running around like crazy in the small space.

“I was sitting on the floor with my back against the door, and I could feel the wind blowing under the door, even though the doors and windows were closed.”

Visual Search Software: Market 2022 – What factors will drive the market in the coming years