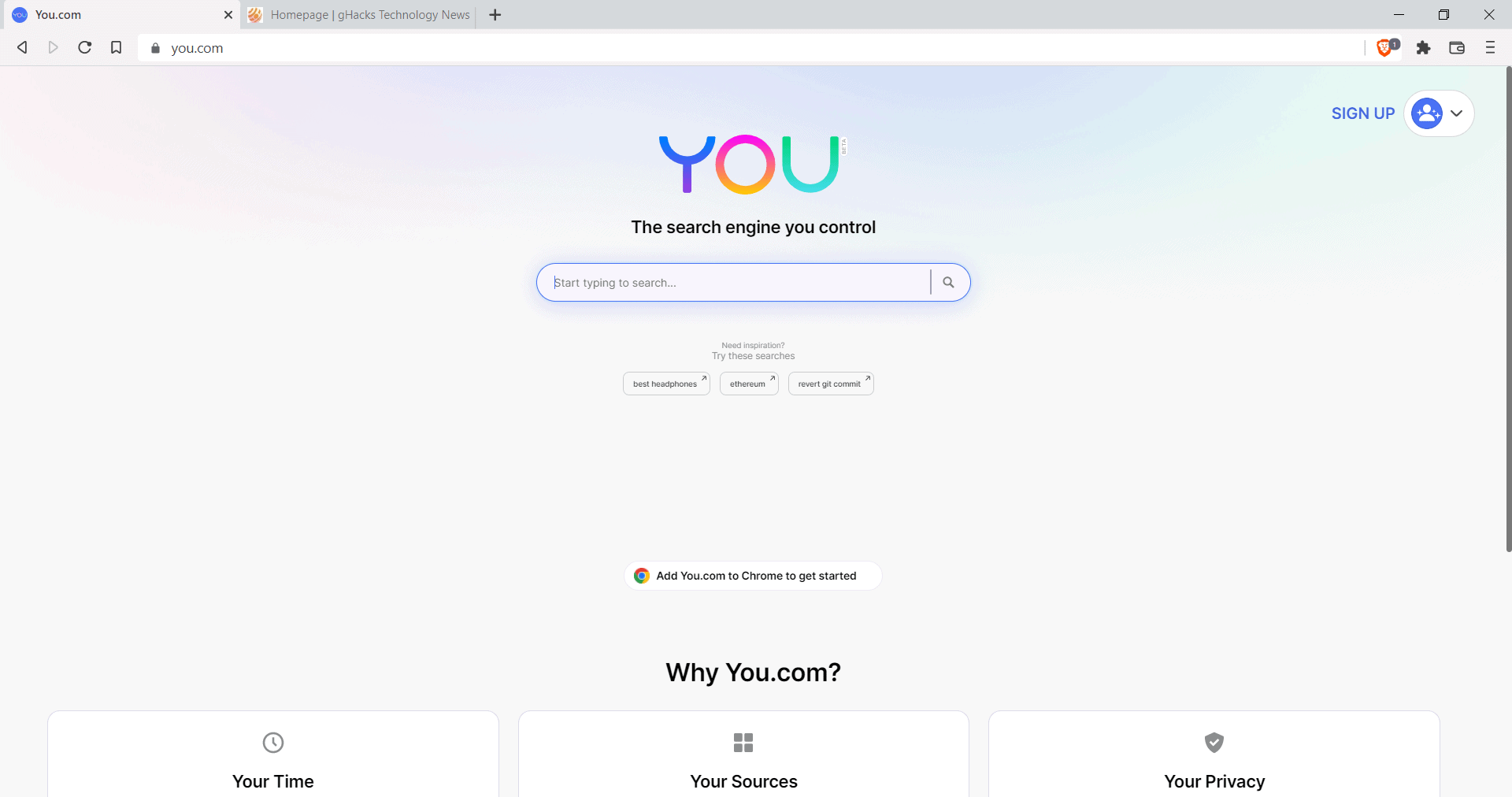 Well, you didn’t even mention that at the bottom of the screen it says: “Some web results, images, videos or news are powered by Microsoft – Privacy Statement.” which means they share information with MS and they will retain it for several months, which is the same as the other 90% of search engines use.

How will it be different from Bing? not so much, and since they’re still influenced by Microsoft Bing, that’s censorship on top of censorship.
I have to admit it doesn’t look so bad in some cases, but it’s mostly crap and gives you the same results that Bing would give you. so what would be the reason not to use Bing at this point? Dark theme?
It’s like pretending that Brave won’t give you the most polluted Google search results, well, you’re going to give you polluted Bing results.

Yes, I have to make comparisons for people to understand some small differences.

But at least having Bing will have a better start, you can search for cgpersia or audioz and you’ll actually get their domain and as the first result something you don’t get in google or startpage or Brave because they only show the domains in page 100+ (blog) which is useless, so giving you normal results on those pages as top results is fine, that’s how it should be even though some people think those websites are controversial.

I searched for George Eliason and it was correct, gives you better results than what you would get in Startpage/Google. with his regular username gheliason you get decent results, not great but better than the splash page.
For his layout, searching for someone like Patrick Lancaster gives you decent results, even his telegram and decent results compared to something like Brave which doesn’t show his telegram or anything.

Looking for something more specific like odessa october 23rd 2014… well you won’t get much on the internet but you seem to be giving ONE result related to this and a few that can be termed as decent, at least related to odessa, in another search engines you will get 2 results odessa (not on oct 23) and then nothing on nothing. Bing also gives the same result not as a first result like on You but it is there so we have to think the only reason they got this is because of Bing even though Bing said they would never show a source like that (it’s on page 2 on my side)

Now use something more controversial, something that might be banned or whatever on the internet, for example “stormfront”, well, You.com won’t even get its domain, but that’s how Bing and Google are working.
Even if you don’t agree with that, people should literally get the domain and as the first result, but no, “we’ll hide it, because we don’t agree”. For example, if you use Gigablast, it doesn’t matter if you like it or not or if you agree or not, it will show the domain as the first result with a badge and all, that’s how it should be.
You.com would be better off if they didn’t even show search results, because you get shit like Snopes and their trash ‘news’ BS, like “it’s shutting down”, but stormfront.org still works today so these are BS search results… I mean, just having snopes out there is terrible, but that’s not my point.

Look for another controversial item like goyimtv and unlike the splash page you get the domain as the first result, the problem with finding it is…will a search engine give you something related to it? or something against? well, Startpage-google, Bing and Brave, you get everything against, and only the domain once, in You.com, you get the domain multiple times and some stuff against it, useless result, so it’s a bit weird how it works compared to others.
Which is interesting because something like Gigablast has all the results on that, mixed up, against, on that, telegram, but it seems like on most search engines they’re just trying to give you the domain, that which is at least better than nothing but and then censor everything else and tell you how you can read about it.

You.com seems to have a nice layout but seems to suffer from the same as other search engines, some people might disagree and say it doesn’t matter because they won’t try to find controversial things anyway, but some do.
But anyway, it’s obviously based on the Bing API, so it won’t be much better than the other millions of search engines based on it.

I could have used more current controversial topics but I really don’t care if I did, there was a sub-stack post with a test like that, they didn’t include Brave (which would have been the worst for the OP’s perspective anyway), https://michaelsuede.substack.com/p/search-engine-censorship-test-results?s=r

But this post shows how Yandex is the least biased, although some people will complain because it’s Russian and it will downgrade some results like cnn, but it seems to be the one giving the most stuff related to research in many cases.
The cool thing about Yandex is that it even gives you Nitter results, something I’ve only seen in Bing with I think Patrick Lancaster’s test, they give you alternative pages that no other engine research does.
Of course things change if you use english vs lang:en and all that, but seems to give you more results related to your searches in many cases, not perfect, sometimes I use the start page, but I really don’t see any benefit to you .com besides the layout, but the layout looks too cluttered and weird for normal searches.

I mean, search for something like 2*2 and you will get the calculator result, just text, not like a calculator that you can use later to do other operations like you can in any other search engine then you get a bunch of useless and thin.

I mean, I remember some instances of searx having reddit as the default source, and a simple search would bring up a bunch of adult results and all that and reddit would just be there to pollute the results, that’s more or less what happens in You.com, you won’t get clear results, but that’s not too bad either, it looks like another Bing API search engine trying to get money quickly like everyone else while promoting “privacy”, but they still have to share information with Bing, and Microsoft AI will obviously know who you are even if “we hide your IP address”.
But it seems they don’t even do it well, because they have the “Private Mode” proxy, so that’s a weird thing to have.

What I really don’t understand is that any so-called private search engine literally has a “SIGN UP” button. Sign up for what??, it’s just a search engine!!
You must give your NAME and EMAIL! is this what a privacy search engine would simply ask to “personalize your experience”?
It looks like a way to easily grab people’s information and then… are they going to keep it safe or…. ?
This should be a red flag for anyone, it’s not like they offer email or anything, it’s just a search engine.

I don’t see any benefit and since it contains stuff from Microsoft, not much will change compared to other (most) search engines that already use the Bing API.